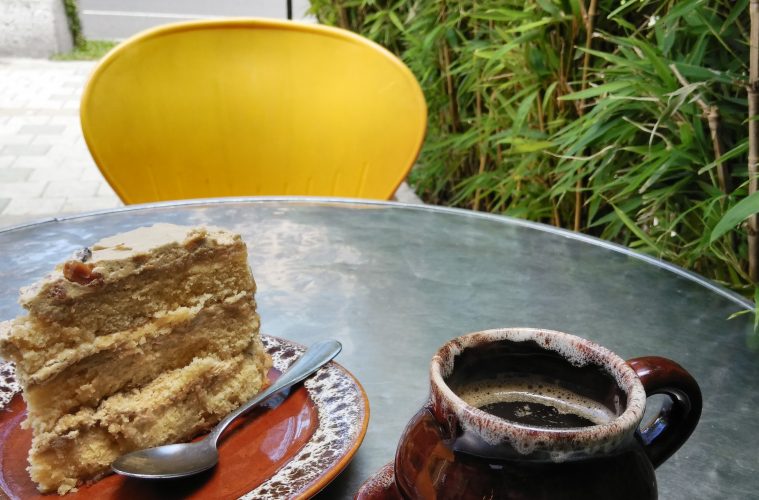 It has been ‘no lo sé’ in Spring and Fall en Bogotá, Colombia. Maybe just ‘no sé’. The phrase ‘I don’t know (it)’ is the common cheek blushing verbiage that lets me off the hook when talking to the backpack inspecting security guard at the supermercado, or the curious server at Bocado Dulce in La Soledad.

The geography of Bogotá is bumpy sidewalks and a most welcoming gray. For those who do not know, Colombia is north of Ecuador and Peru, West of Venezuela, South of Panama and Northwest of Brazil. It is located in the Northern, Southern and Western hemispheres, coasts the Caribbean and Pacific and is economically tied to oil, coffee, fruit, and raw mineral exports. Plus, cocaine (aka ‘black market’ livelihoods). The equator is just 513km south of Bogotá. The skies are still gray. The city enjoys life with no air conditioning and an extra blanket. A cool fahrenheit sixty-five degrees.

These are textbook notes though. Do not pay close attention. The difference here, between caring and not, is likely the USD exchange rate to the Colombian Peso, which over the last ten years has not been kind to the residents of Bogotá. All this means that bananas and raw minerals remain cheap for Americans, and Colombians in urban areas may have to opt for a 60 hour work week. Same as many ‘banana republics’. 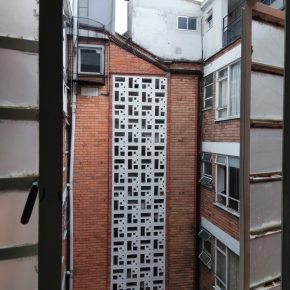 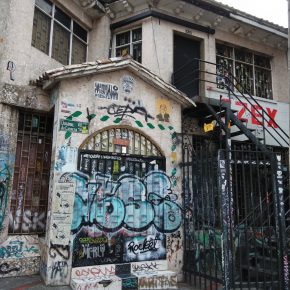 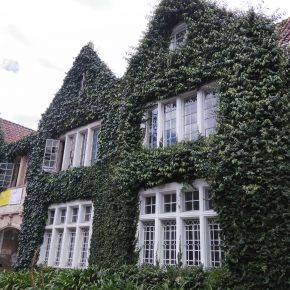 Banana politics do not stop the marvel of Carrera 1 that weaves like the backroads of the Appalachians at hyper-fast speeds, or the alternating brickwork twenty stories high, or the grace of warm modern construction on every other corner, all here 7,500 feet above sea level.

Political corruption does not stop the arepas, fried daily, and placed in little glass cases along the sidewalk. And when it starts to rain, umbrellas are still available at every cigarreria scattered across Bogotá. I sip Colombian coffee in living history, breathe in contemporary practice, and am witness to an unleashed, sexually and socially in touch society.

I sit in the Park Way in La Soledad, some ferns around. Avenida Carrera 24 is edged by cement, sculpted like waves. Street sweepers meticulously pick up cigarette butts. I sit there and reflect. I watch the people. Some friends rehearsing a play, they seem to know their lines. A women with frizzy hair, on a yoga mat. Two young men standing in adidas tracksuits, with short dark hair, making out. An old woman wearing all beige, sitting beside the pigeons and coughing. A jogger in polyester, full sprint. Business men, with matching prescription glasses and black backpacks around their chests.

Anyway, whoever invented the leash should just go. A rope, with a loop and perhaps an eyehole, on a neck, tug and tugged, is a problematic social endeavor. The man in a long brown jacket, earring, and bundled up hair would agree with me, walking along Carrera 13. He does not wear a leash. His dog, a large dog, prances alongside him, in front of, behind, crossing from side to side and fully aware of the mortality that comes along with prancing on the tiles. Neither of them wear a leash.

I am spending three nights in La Soledad. It is not like Chapinero, not like La Candelaria, not like Polo Club, or Galerias. For one, it is not near Carrera 7. The smog does not carry quite as well from Avenida Caracas to trouble my espresso in the Park Way. Open air, with bamboo planters, metal tables, and tiles are included of course.

Tonight I meet my friend, Juan. He is my friend. So is Miguel, and Gustavo, and Nicolas, and Maria, and Henry, who I saw days prior. I see each friend at lunch, or night. Mornings are mine. We talk about their customers, some textiles, love and family. I will breathe the haze of Avenida Caracas on my way to see Juan, undoubtedly. Small short breaths. My driver and I will look out opposing windows and smile briefly. This is my night, under the trees with the yellow flowers.