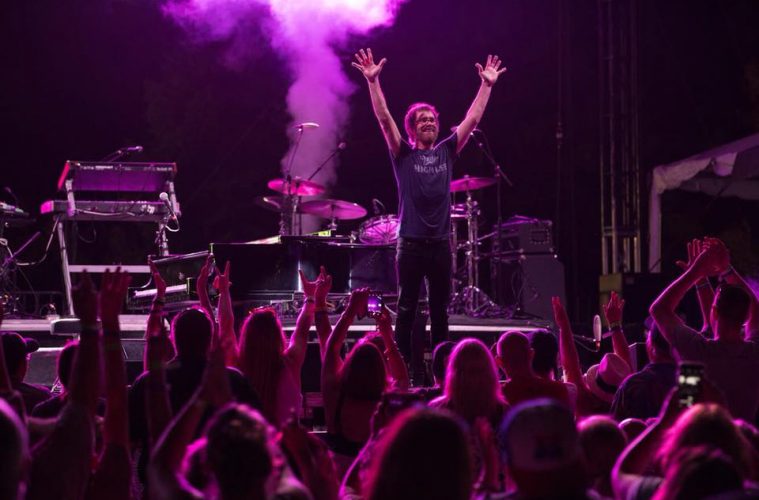 Well, for a number of good reasons (the major one being that our publisher was keen on the idea), but chiefly because you don’t pass up an opportunity to see a cascade of color, a mistral of music, and a galaxy of gastronomic glories all packed into one holiday weekend. And some of the unexpected things that happened in Royal Oak those afternoons and evenings were quite good, too.

The following is a modest kaleidoscope of impressions and memories …

Media pass graciously arranged by Ashley Veenstra of Marx Layne & Company opens the gate at Third and Center … pierogi from Gosia (all the way from Pittsburgh?!) tempt our palate as strongly as the sliders from Little Bros and the fudged concoctions at Golden Cone … Ashley Peacock at the Ford Alternative Rock Stage is our first musical stop of the day and we make a mental note to catch The Killer Flamingos at 9pm … two  opportunities to appreciate photographic excellence from Chris Maher and Steven Huyser-Honig … a stop at Paper Trail Books to improve our minds, savor the air-conditioning, and hear the welcome news from Scott and Natalie that they’ll be remaining open for another year … Cameron Patrick from Atomic Coffee judges us to be in dire need of some iced caffeine and treats us to a refreshing draught … Was that an angel singing or was it Nicole New?

Muggy – and the sky looks like it’s planning something … Noon – and Ballet Folklorico De Detroit shows up at the Flagstar Stage at Fourth and Lafayette … fish & chips from Union Jacks elicit approval from an ex-pat from London … Prominent banner across the front of Da Luigi (WE LOVE & SUPPORT OUR POLICE DEPARTMENT) is Luigi Cutrera’s way of expressing a citizen’s appreciation for “people who deserve more gratitude than they’re getting these days” …  Chris Laporte’s pastel works … Timothy Schaeffer talks about his wood … Gusoline Alley welcomes us with open arms! Right …  It rains. No, IT RAINS! But The Orbitsuns complete a full set near the close of the evening … missing kid is found and happily returned to mom and dad …

PRP Wine International treats us to THREE glasses of Duca d’Amalfi Valdadige … Volunteers from the Charles Wright Museum talk about the outpouring of love for Aretha Franklin … photographer Dori Sumter catches a glimpse of us while we listen to Nadir Ormowale at Soaring Eagle Rock Stage … We run into Sara Myefski (now a bona fide bartender at Gusoline Alley) and she suggests a brief A/C respite from the heat inside Noir Leather. We happily comply – and what to our wandering eyes should appear but Castratta L. Pain, a caged dominatrix with one of the sweetest attitudes we’ve ever encountered … the most impressive machine of the day turns out to be the wheeled Cuisine Machine from Soaring Eagle Casino. Chef Kyle Cassaday expressed nothing but satisfaction over the way logistics have been handled by the event’s management and gave us a delicious sample of frog legs from the kitchen … Sorry, but even reporters get thirsty. Back to Gusoline. John E.L. Tenney is not the designated doorman this year, but the wizard of weird happily informs us that upcoming discussions at the Royal Oak Public Library this autumn are on the agenda … WE catch a glimpse of Dori Sumter this time. She’s capturing the visuals at the Flagstar stage as Xiao Dong Wei mesmerize a crowd with a fusion of east and west. Dori takes our photo, too. The lens cracks … and it wouldn’t be AB&E without Jill Jack.

Happy Labor Day! … Emily Rose, Audra Kubat, and Tamara Finlay perform at the OCC Cultural/Acoustic Stage and nail it! … Amanda Klein, a political woman to be reckoned with these days, suggests that a brief stop at a table filled with Democrats at Washington and Fifth might prove enlightening. We go, we engage, we debate, we leave with buttons and a fistful of literature … ice cream from Treat Dreams … Tracy Kehr’s glass … The Ruiners and The Corktown Popes are back-to-back on the bill outside O’Toole’s. Rick Ruiner  apparently channels a rain dance during his gyrations and a brief shower rains on Terrance Burns and his holinesses … the night and the festive vibe ends perfectly with Sean Blackman’s In Transit – an energized interlude of color made even more impressive by Steve Caldwell, James Simonson, Bob Mervak, Xiao Dong Wei, Mariana Risquez, and a swirling vision of beauty named Lisa Montes. The crowd wishes Sean a Happy Birthday … we manage to catch the last ten minutes of James Wailin and the Reefermen on Fifth … a final cold one at our favorite dive … and good night!